The Association was originally established in 1954 to meet the needs of farm workers in the Fish Hoek-Kommetjie-Noordhoek valley and surrounds, in order to address poverty, unemployment and lack of housing due to the rezoning of farmland to residential land.

• In the 1970’s the Association identified a need for care for both physically and intellectually challenged members of the community. A dilapidated building was identified and after funds raised, the building was restored, and a lease arranged with the Department of Public Works. This is how the Centre for People with Disabilities began to take shape which has developed today into accommodation for a work group with special needs run by Ocean View Association for Persons with Disabilities, a School for Learners with Special Educational Needs and at the time the headquarters for Fish Hoek, Kommetjie, Noordhoek Welfare Association.

• In 1998, the Association extended its services to the nearby informal settlement then identified as Site 5, later to become the township of Masiphumelele and employed a Xhosa speaking social worker.

• In 2003 the social worker identified a need and started a group for children with special needs that met twice a week. This group slowly increased in numbers and it was evident that the small venue used was totally inadequate. Thus land was purchased with funding from the Desmond Tutu Educational Trust and the building of the first phase, a special day care centre, the Sinethemba Centre, so named by the parents meaning “we have hope”, was completed in March 2007.

• The Centre was designed according to the needs of special needs children and working very well, however we were border lining being overcrowded. An application was submitted to the Rotary Club Cape of Good Hope for assistance extending the Centre with an additional wing to relieve the pressure and to assist children on the waiting list. 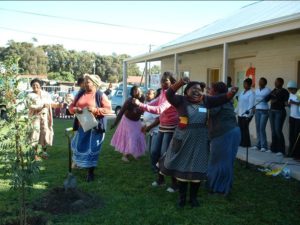